In Chancery: The Genesis of Micro Caseflow Management

This article explores an early example of subordinate judicial practice in England and Wales in which we may see some issues that later appear in the relationship between informal justice initiatives (especially alternative dispute resolution) and the civil justice system. Broadly speaking, the paper looks first at the symptoms of systemic failure in the pre-1873 system which led to the creation of the Official Referee’s office. It then considers the relevant recommendations of the Judicature Commissioners and the reasoning behind such recommendation, looking at both the macro- and the micro-levels, before exploring the referees’ diverse jurisdiction which provided a creative foundation for the evolution of interlocutory innovation. The article argues that structural realignment of the court system by the Judicature Commissioners was not sufficient in itself to eradicate all its encumbrances, but it indirectly empowered the referees to eventually bring about revolutionary procedural changes. 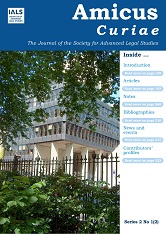